We have had a pretty active monsoon season that has left the trip on Forest Road 123 a little challenging in spots. While traveling 123 proceed with caution as the rough areas are unforgiving to your vehicle if taken at a normal speed. A few of the roughest areas come up on you very quickly, so a slow speed is the best practice until you are familiar with the areas that need your attention. We are hoping for a grading from the County in the near future, but for now, many pieces of their road equipment are assisting up in the Belen area that was hit very hard with floods and hail a couple weeks ago.

Updated News for FR123–The County began the grading of Forest Road 123 this morning (10/17/17) to grade and make repairs to areas that sustained damage during the monsoons this summer/fall. The work on 123 should be completed by Thursday.

Our Abbe roads have fare far better. Three of your board members participated in a road survey last Sunday and found the roads to be in very good shape overall. A grading is scheduled for the last week in October that will service all the road surfaces, removing the vegetation that built up over the summer and doing some repairs where we did have some minor washouts on the roads.

Regarding the rash of break-ins in Abbe back in the late winter/early spring–the Sheriff’s office and your Board are not aware of any new burglaries since the end of March. There are some rumors around that the break-ins are ongoing, but they seem to be just that–rumors. The County Sheriff was able to capture on video a man and woman inside one of the houses in Abbe back in March. They ID’d the perpetrators and drew warrants for their arrest. Unfortunately, by the time all the red tape was cut though, the two were no longer in Alamo.

Lastly, if you have been to Abbe in the last week you will notice a new sign at each of the four entrances into Abbe from Forest Road 123. Our signs were 16 years old and the one at 123 and Geronimo has been torn off its post 5 times and remounted. In addition it appears the lower right hand corner of the sign had been shot off. The board has been discussing replacing that sign for the past three BOD meetings. In a conversation with the Sheriff, he suggested we cut way down on the sign verbiage, increase the size of the lettering and increase its overall visibility. So the BOD approved to replace all four signs per the attached photo of the sign at 123 and Geronimo. The signs were purchased locally from Lucky Signs and installed by the Board. 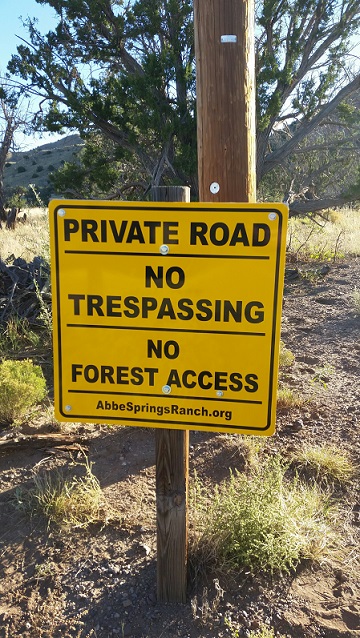 Summary of Water Grab Actions for 2015

Summary of Water Grab Actions for 2016

Summary of Water Grab Actions for 2017